I entered this race in July 2018 so had 10 months to prepare myself. Early on I set ambitious targets that I felt I were attainable as long as I got the training in.

In October 2018 I competed Ironman Barcelona and then rested/did very little until Christmas/New Year after tearing my meniscus pacing a 5km in late October.

In January I started up again and started to blog about my training. My blogging lasted 1 or 2 posts as work and study for my masters took over. I was told study would be 20 hours a week, I was hoping it was an over estimate and would really be around 10 hours a week. It’s ended up more like 30 hours! This didn’t leave much time to train and as a result, meant I headed into Mallorca at the heaviest I’ve been for a good few years and probably the most unfit.

Those travelling in the Ryanair flight met at the airport and we boarded on time. There was an announcement that we were going to be delayed due to air traffic control issues in France but I didn’t pay to much heed to it, other than knowing it was likely we would be arriving at the hotel late.

A couple of hours later the captain informed us the flight was cancelled and we went into a mad panic. Everyone was trying to get rerouted – we weren’t the only triathletes trying to get to Mallorca on the flight, and others I had talked to were heading to weddings. Ryanair had no more flights out of Dublin for 5 days. Neither did any other carrier.

After much searching, we ended up finding a flight the next morning from Cork. Nearly everyone in the club booked a flight and we got the next Aercoach down to Cork city. I had expected to sleep overnight in the airport but Caroline and her parents kindly put us up overnight – they stayed up late and greeted us with hot tea and sandwiches. After a much better night sleep than expected, we were up, fed again, and on our way to the airport and finally on our way to Mallorca.

Once we landed and got the transfer to the hotel we were rushing around to get registered and racked in time. There was a bit of messing around with ShipmyTribike as we were arriving after they were closed but the lads hung around so we could get our bikes and we managed to do everything we needed to do in time. We were all wrecked so had dinner, then went to bed.

Next morning, we were up, ate breakfast and headed down to transition. Final checks were done and wetsuits put on ready for the race. The music was pumping as we got into the appropriate corrals and waited for our turn to start.

Swim – pretty much where I expected to be after only swimming 1900m all year. I had guessed 38 mins and was in just over the 36 min mark (36:22) so overall happy enough. Gary had a great swim and past me coming into T1. I have a little bit of a reputation for being slow in transition so made sure to be as quick as I could and left transition just behind Gary – who promptly dropped his bottles over the road at the mount line. T1 time was 7:16 – it was a long transition (distance wise)

Bike – Never felt comfortable on the bike and the extra weight really told up the hill. That and having 39/25 gearing which meant my average cadence for the bike leg was low at around the 70 mark rather than the 90ish it would usually be. Bike took me 3:32:34.

The hills weren’t actually that bad I just had to grind up them. The return leg into Alcudia was into a headwind too which made it tough and I’d missed the fast groups to get into a pace line with. I finished the bike with my feet burning and no desire to do the run.

T2 was slow. I came in off the bike and saw the supporters. They gave me a cheer and lifted my spirits and I decided to give the run a bash. (7:40).

I left transition, found a portaloo and sat down to have a chat with myself. Chat had I set off and decided to use a run-walk strategy to try and keep below 8 min per km. Run was pretty uneventful, but seeing the supporters each lap was great for flagging morale.  The km’s counted down and as people in the club went past me I tried my best to give them a cheer.

On the 2nd of 3 laps, I saw Graham holding up a pint to spur me on. It didn’t work, I was still labouring round but at least I knew I was coming up on the last lap.

Finally after 3:02:19 I crossed the line in a time of 7:26:10 and was pretty emotional – I went through the finish and saw a couple of club members. I just wanted to be by myself so I made my excuses and went and sat down by myself for a few minutes and had a little cry. Finally pulled myself together and I then made my way outside to the rest and cheered a couple of people who were still out there home. More emotions as a few members had gone back and accompanied Hilary right to the line – including an enthusiastic supporter who was running in flip-flops.

The rest of the weekend was great – we all got on well and enjoyed several drinks together having great craic singing songs in an Irish bar till the early hours. 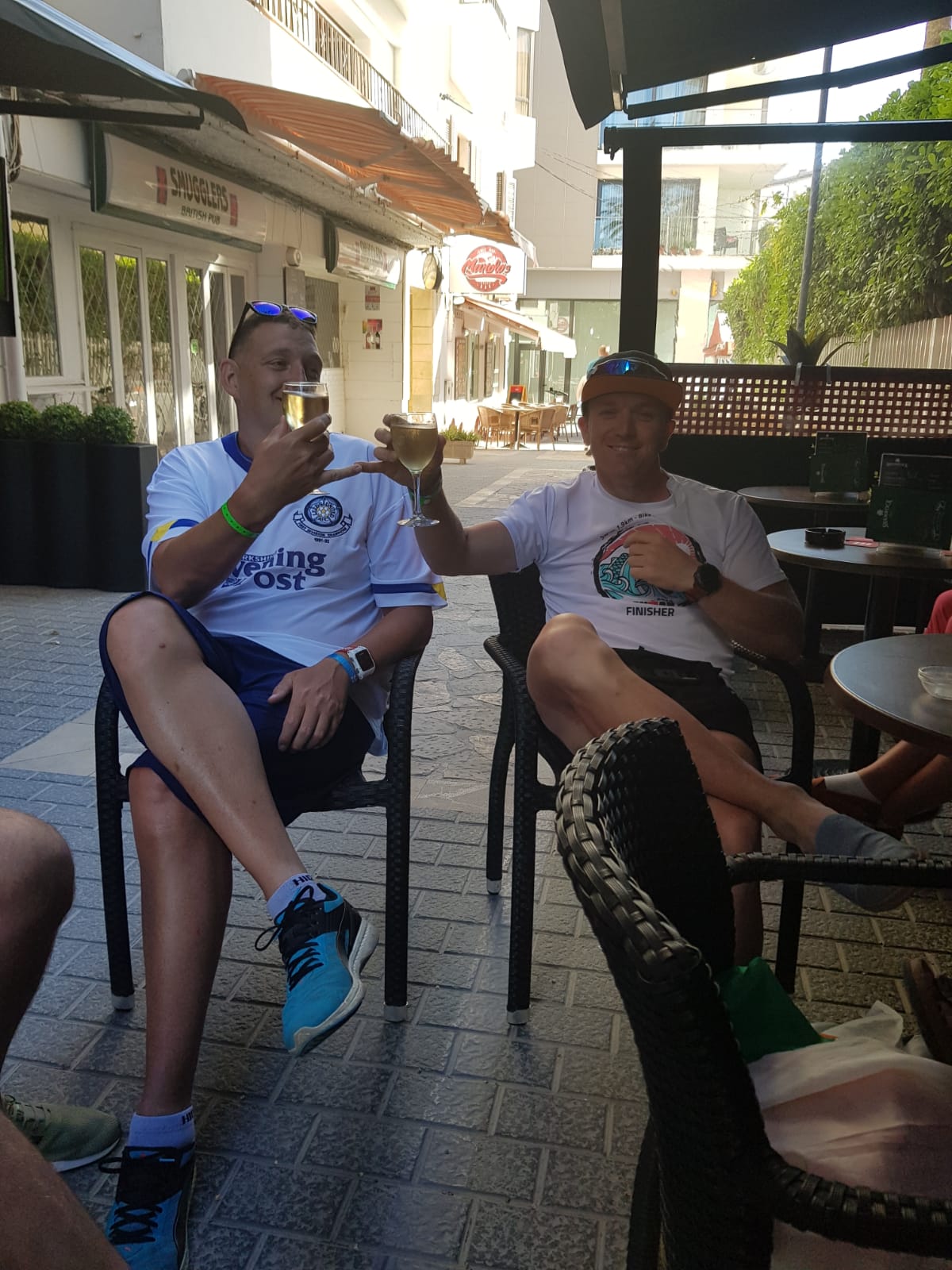 In retrospect, my race got the result I deserved. I know I can get through a half on minimal training, but with no real training at all, it was always going to be tough and on the slow side.

Hopefully, I’ll now be a bit more motivated and without the studies I’ve a few scores to settle there now for next year!