I’m not a proper triathlete, someone who trains in three disciplines with an end goal in sight.

I’m a tryathlete, someone who has a random idea about doubling the furthest distance ever swum out of a pool or cycled on the same day and then throw in a half marathon at the end, just for the craic.

I knew I wanted to do a greater distance than Olympic as I had not died doing the last one, you will see a common thread of stupidity here……

Flights race entry and a new (secondhand) bike all completed by early January, training diary ready and interest enthusiasm, and weight were high.

March arrived a whole lot quicker than anticipated but swimming had started in earnest along with proper running and Sunday spins.

Having been unable to run further than 6.5k without pulling something the beginning of May was here and run progress was looking a bit dodgy.

My swimming had improved greatly thanks to Danny and his bitching at me to stop crossing the arm over and my new mantra of high elbow grippy hand and reverse Hitler going through each stroke I was feeling pretty good, in the pool at least never being more than 25m from safety.

Sunday spins had become a great cobweb reliever and had steadily increased from the first 20k spin way back and having done 75k two weeks before I was comfortable I could complete the cycle.

My running had become fairly non-existent due to regular issues with both legs. I’d managed a run-walk 5k without pain the week before the big day,… Sure just do that 4 times the rest will be adrenalin I tried to convince myself.

So here I stood at Dublin airport about to board a plane and truly stepping into the unknown.

My goal was to finish the event, nothing more. Knowing how my legs were untrained and banjaxed I had already been vocal that if I had to walk 4 hours to get there I would, it was all about the bling and cake. Tri Laois had seen me walk the 5k in under an hour so even if the wheels totally flew off I was confident of completing in under the 8 hour cut off.

I had no battery on my mobile and needed to register before the event. Arriving a mere 30 minutes after they closed sweaty nervous but with a newly acquired travel charger, a kind soul allowed me to collect my things and depart. Repeat check all that stuff in advance and print it for reference.

10pm and half an Italian BMT later I began to reassemble my bike, pedals that look backwards screw in the wrong way along with rear mech that was hanging lower that a grannies boobs were seriously threatening to make me lose the plot. Queue a video call to Chairman Richard some swearing and some lumps with an overeager set of tri bars and the bike along with wobbly stem was ready. Me on the other hand, I was a serious bag of nerves.

After the French people who decided to have a full-blown VERY F***G loud conversation outside my door were told to shush or be killed at 3am I rose like a nervous zombie 2 hours later.

Racking my bike with tri bars that were last used in a race in 1992, YES ’92 I noticed there were a lot of fit skinny looking people walking nonchalantly around with water bottles, energy bars and amazing hair.

If I’d seen myself from a distance I would be asking what that fat bloke with sunken eyes is doing in there with the athletes.

Group photos and wetsuits applied (using liberal amounts of baby oil gritted teeth and assistance from at least two people in my case) we started the long walk to the swim start.

Thinking it looks like someone was being attacked by an angry mob of washing machines but it turned out to be the pro men who were going faster than I run across the marina, followed a few minutes later by the ladies who were just as quick.

Our group split into two as all the young-un’s went with the white hats and I was left to represent Tritanium with the oldies with red hats.

Water was cool but didn’t suck the breath out of me like our Irish lakes had earlier in the month. Had a good rhythm going and just followed the mess of water in front of me having not been there for the initial race briefing the night before. Of course, I had my earplugs in for the Portuguese explanation of where we were to go just before the start. More rules, check all this stuff out before arriving.

I came out of the swim pleasantly surprised with how I was feeling as this was the furthest ever swum in the sea in one go and not seeing stars or hearing colours as previously (thanks Danny, the high elbow “encouraged” at least two that swimming that close to me was a life diminishing event, the grippy hand helped me grip more than 1 shoulder and the reverse Hitler propelled me over quite a few not so lucky white caps, sorry L) PB1/3 COMPLETED

Transition was very slow as I needed grown-up helpers to get into the wetsuit but can opener to get out was not readily available.

Seeing lots of fancy bikes still racked gave me a little boost as I made my way to the bike mount line to find #thebroderick taking photos, I supplied a thumbs up and a (what I thought to be cool smile)grin and off I went wobbly stem and all. 200M in and the first upwards slant exactly where we get water from meant wobbles and panic as water racked and I was off. Another uphill drag? 500 m flat to down and another up? The motorway beckoned and I was being as aerodynamic as my belly would allow. The slow hum of what I thought was a motorcycle turned out to be a disc wheel when some people on their second and maybe third lap went past me like a blue polka-dot turtle. Trying to keep myself to myself and not get caught up in the moment was difficult but I tried to just watch the HR and say over and over, it’s you against the course, let them go.

The “hill” was not welcome at all. First time up I hit the lowest gear about 200m from the top, laps 2, 3 and 4 were a considerable distance further down. The only saving grace was that being a little more buoyant in the water makes for a great downhill section.

I had seen Ger at the turn around on the 2nd lap and though she must be a lap ahead of me, I stuck to my predetermined “don’t go full retard on the bike, there is still a run to do” plan. Plenty and I mean PLENTY of people passed me on the bike be it the relays, pros, the fella on the hybrid with white rim tires and mostly going up the hill. I got them all on the way back down, clocking up a 61km at one stage it was the best feeling ever for that 90 seconds that it lasted.

My left quad started to cramp towards the end of lap 4 but I still felt pretty good. Eoin had said to eat during the bike and I had two bars taped to the top tube, a bit too much tape as it turns out and it took the best part of 2k to pry the miserable b****rdsa out so I could eat them. Trying these before the event in a Sunday spin was a godsend as I knew the results they would give.

Seeing Rach close to the turn around at the hill on lap 4 confused me a great deal as I must have passed her during her impromptu #wheelchange101 class. I kept to my plan and even with my greater “speed” down the hill only saw her back at the start of the course where she said 1 more lap, puncture. My heart sank for her as the day was getting warmer by the minute and the road lonelier and lonelier as more and more cyclists pulled off for the run.

I took water at each opportunity and the ¼ banana’s they offered for lap 3 and 4 making sure to keep the last bottle as a memento. PB2/3 COMPLETED 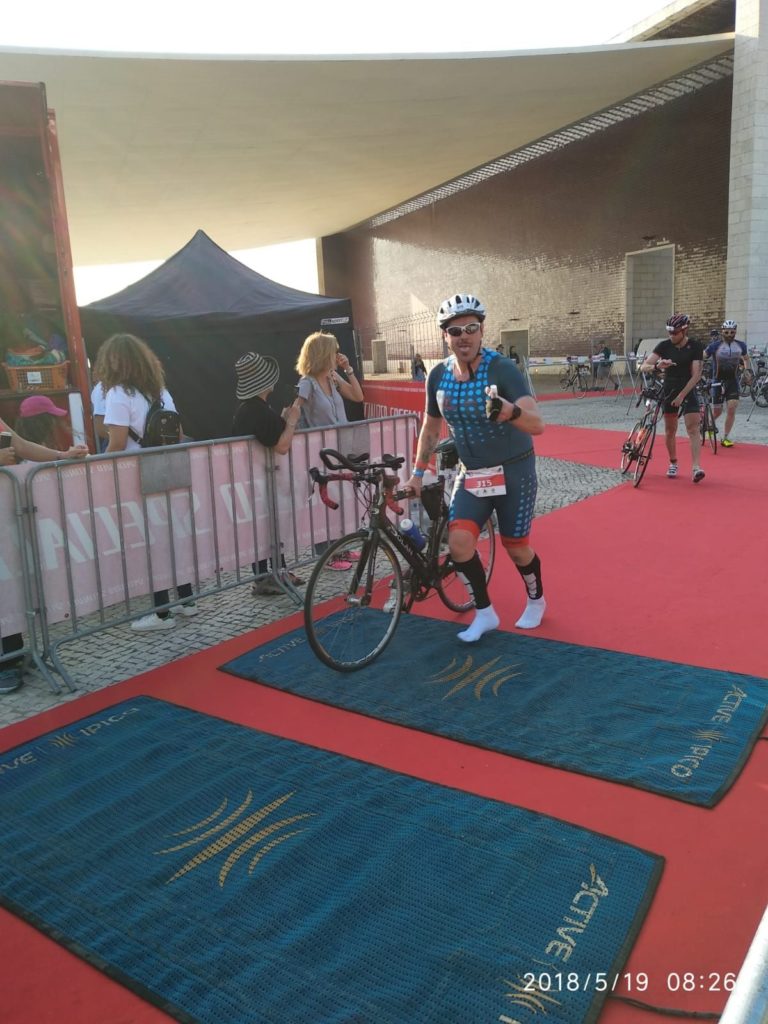 Richard had mentioned hot feet in Barcelona last year and I knew what he meant as I dismounted the bike as it felt like I was walking on hot rocks.

Another slow transition as the cramp that had set in was making a show of me in front of the photographers, Gurners weekly would have me as a coverboy I reckon.

I took the previously stowed bottle of coke and away I went, walking the first 100 m and starting my slow shuffle as the body tried to get used to running. Cramp. Ouch, walk it out and start again. I would get to a maximum of 225 plods with the left leg before it would kick in again and I would need to walk about 100 before it stopped. I resigned myself to this for the rest of the laps and kept going.

First Emma then Ger passed me on the run and I saw James and Brian and Mark going in the other direction too. Mutual encouragement from all continued as we passed each other in each direction and my plodding was getting less and the walking more. At the end of lap two I could not manage more than 15-20 run type strides before either the quad or both hamstrings would threaten to go. I had eagerly accepted some diaoralite earlier and it had helped for about 20 minutes but I knew at this stage it was mental strength that would win the day. While I could still walk I could still finish and this took the stress out of it. I was never going to be sprinting to finish under 6 hours but finishing was going to happen however long it took

Rachel arrived on course and caught up with me eventually as I was at this stage reduced to a quick walk interspaced with stooping to stretch hamstrings. She looked wrecked, so I tried a little dance when she approached the next time to boost her spirits. She thinks I’m mad, but Id like to think in a small way that the fact I was still going helped her push on. Rounding the final cone and starting down the finishers chute I was very pleased to see nobody behind me, this meant no awkward run scrabble to beat someone over the line.

As I approached the last 200m an English speaking voice said “keep running well done you’re nearly there”. I stopped and had a laugh with them and said “this is the value for money 70.3 f**k that finishing in 5 hours lark and not enjoying the view” The final turn was within sight and with a careful and slow turn to see nobody behind me I rounded the corner in a slow trot and ambled thumbs up across the line. PB 3/3 COMPLETED.

Thanks must go to those who travelled, to compete and complete and those whose advice and wise words on training nutrition and general don’t be stupid and do this were instrumental in getting me over the line.

So if you are wondering if you can do a 70.3 the answer is a wholeheartedly, YOU CAN. If you are thinking of stepping up from Sprint to Olympic YOU CAN.
If you are contemplating trying a trí at whatever distance you feel you are able for YOU CAN.

Disclaimer: No triathletes were killed or irrevocably damaged during the making of this event. Rumours of over-ambitious dance moves and refuelling only with #superbock burgers are also strenuously denied. 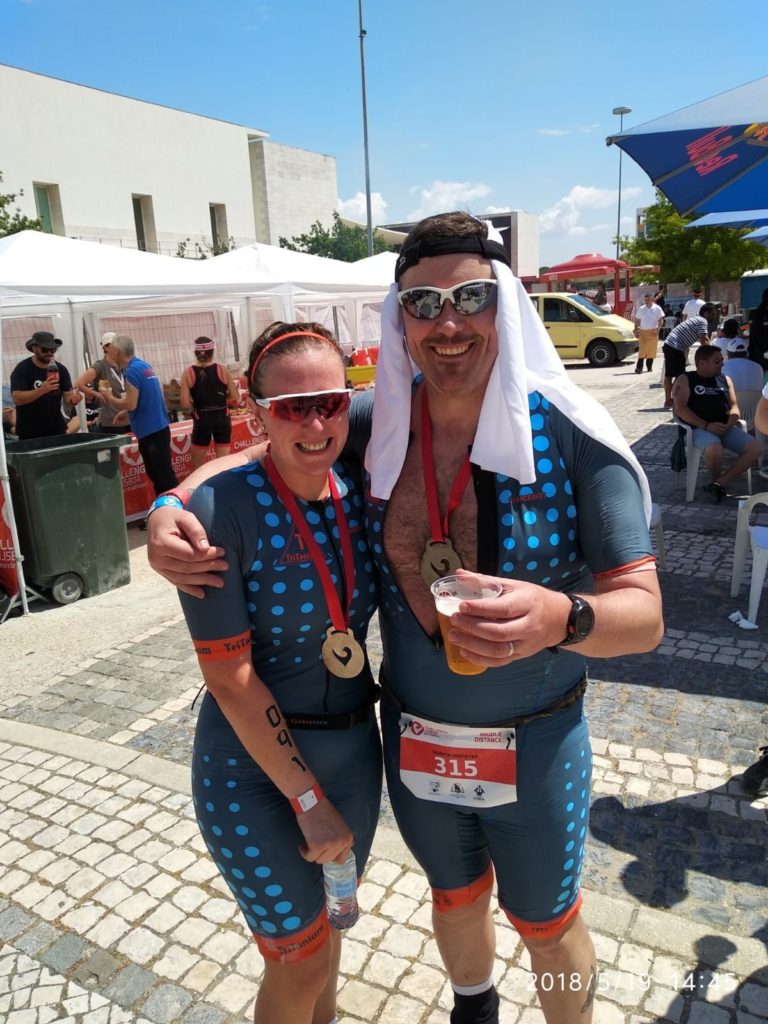