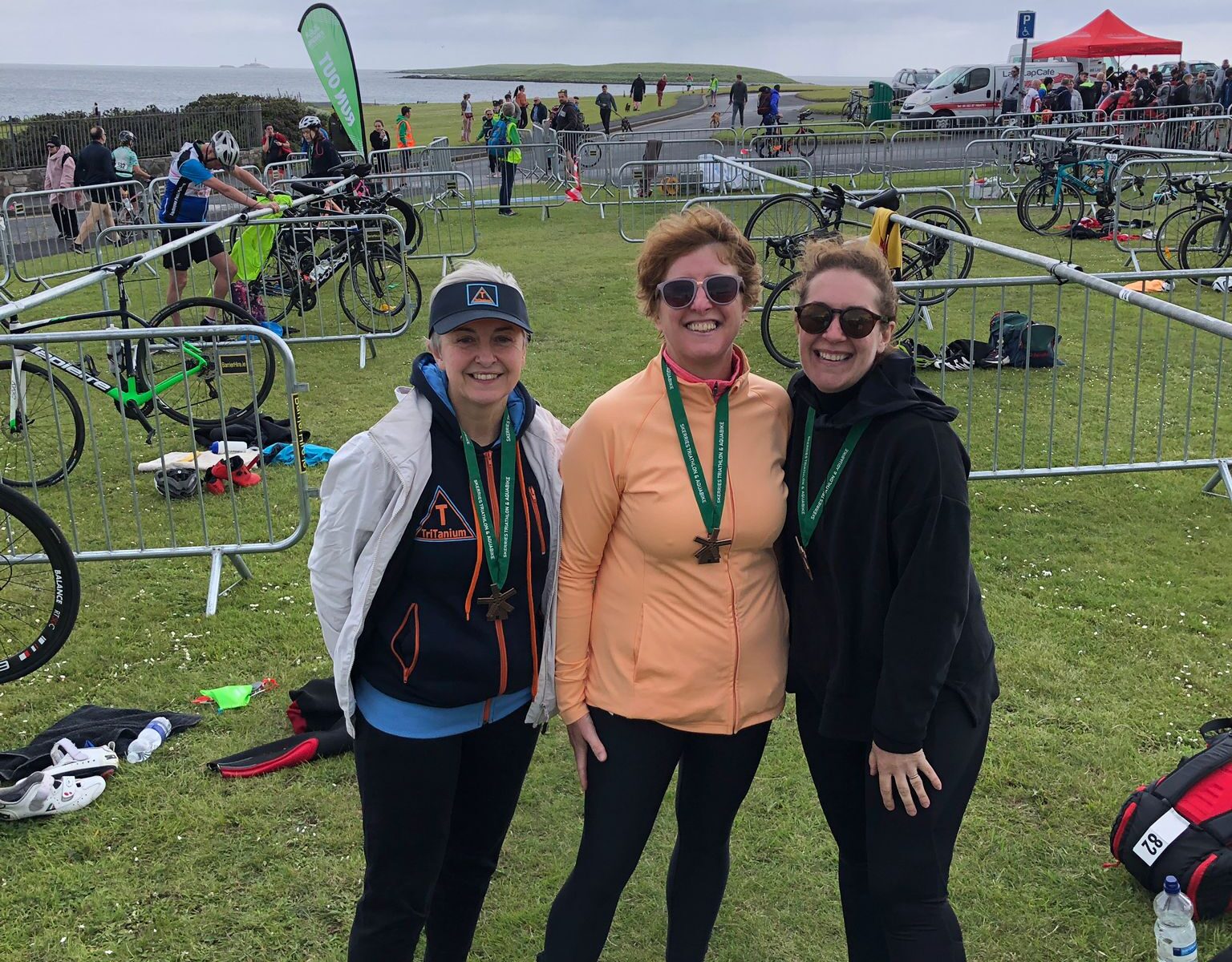 On Sunday 12th June 2022 I did something that I have never done before in my life.

I swam 750 metres in the open sea, out of my depth, without my feet touching the ground in Skerries, north County Dublin.

I set up everything in transition.

I met my fellow Tritanium teammates.

We joked and laughed as we walked down the beach.

Elm and Barbara advised me to get into the sea to acclimatize.

We looked like we knew what we were doing.

I laughed at Paco’s verdict of how cold it was – it cannot be repeated in polite conversation.

I looked out at three yellow buoys that seemed much further out than I had imagined in my head.

Where were the kayaks?

Where was the promised speedboat?

I was telling myself that this was the best opportunity ever to do this swim because if anything was to go wrong there would be plenty of help nearby.

But where were they??

Its ok, it’s ok , soon they glided across the bay and got themselves in to position.

Make sure you get your timer started.

And then we were off.

I can honestly say there was a nano second of “WTF I’m turning back”.

But I couldn’t. I had to beat this.

I had to get over this vomit inducing fear of swimming out of my depth.

I had done the training.

Sighting and dragging were not skills I was going to worry about.

Getting to the end was all I was worried about.

Ok Brenda you can do this.

I set myself the target of 20 strokes then stop and check my location.

20 stokes, stop and check and so on and so on until the realisation hit me – I was doing this.

I was swimming strongly and steadily.

I remembered to focus on the technique

I remembered Gráinne’s swimming technical terms of “swoosh” “swoosh” and “bop-bop-bop-bop-bop” and I concentrated on using my hands and arms properly and as I got into a rhythm, I could see I was moving along the course.

I actually passed people out.

This is important as it was the only time during the triathlon that I passed anyone. I think my race number had a sign on it visible to everyone but me with “pass this obstacle” on it during the cycle and run – but who cares.

I passed the buoys.

I could see the exit.

I was doing this.

To say I got a rush of adrenaline, sheer and utter joy and great self-satisfaction that I was swimming out of my depth, in the sea, in Skerries bay and was nearly done is an understatement. This was massive.

And it is massive.

And I wouldn’t have done it but for the training and camaraderie of the Tritanium Club team.

I wouldn’t have done it but for the encouragement and steady words of Elm and Barbara.

I knew I had to overcome this challenge do this, and once I had the swim done the cycle and run would be a joy.

The scenery along the Dublin northside coast was beautiful as were some of the houses.

It was windy going out but fun coming back into the town.

There were some quare turns on the route and definitely caution was needed.

Heading into the second lap I knew there was a headwind and one or two “slow” hills as I call them.

The Tuesday and Thursday night drills of going up and down the hill at Damastown and belting out from Kilbride all paid off and let me enjoy the cycle. I cycled at a steady pace as I knew to save the legs for the run.

I have learnt on the Sunday cycles that I need to eat something every now and then, so I had my jellies and gel pouches handy and thankfully the energy levels didn’t drop.

As with the swim I just took the run in sections as well.

I broke it down to a certain number of steps and techno songs. I am fantastic at playing “Insomnia” by Faithless” and “Hey Girl, Hey Boy” by The Chemical Brothers in my head as I jog along.

And then you see the finish line.

And for the first time ever in my life I hear a commentator saying “And here comes number 83, Brenda Kearns from Tritanium” and I play “Chariots of Fire” by Vangelis in my head as I whoop and cheer crossing the finish line.

You may have noticed there is no reference to cadence, heart rate, transition time and other such triathlon terms in this report. I do plan to learn more about them and how such knowledge will make me better – but for the moment it is enough to know I did it and that if I can do it you can do it too.

To all the members of Tritanium I have met and chatted with since I joined, never underestimate the subconscious impact of the little tips, the words of encouragement, the pushes on the bike up hills outside Batterstown, the “get your head into the water Brenda” and “the trick is not to effing drown” words of advice all seep in and help.

On Sunday 12th June 2022 I did something that I have never done before in my life.

I swam 750 metres in the open sea, out of my depth, without my feet touching the ground in Skerries, north county Dublin.