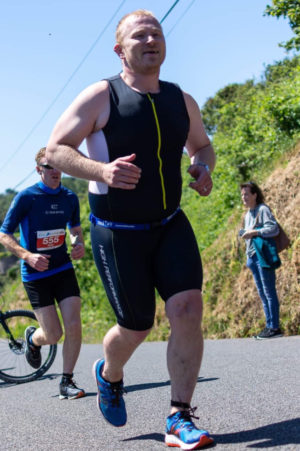 This was my 3rd triathlon ever and my first open water sea swim in a triathlon event. Confidence was high and was hoping for a sub 1:30 finish. I thought the first bit of training I completed in the N2T programme would stand to me but since the arrival of baby number 3 I haven’t been doing the required training but believed my base fitness was ok and surely this was only a sprint triathlon,  it will be grand! How wrong was I, this ended up feeling like my Ironman. I scuttered over the line a broken man and questioning why I ever thought triathlon was for me.

A sign of things to come were already on show Friday night when I rocked down to Dunmore East. I was looking for BMW Bolands in Dunmore East to register only to realise that BMW Bolands was back in Waterford City. I made the 20km trek back to Waterford city to register as wanted to get involved in the pasta party and soak in the pre-night registration atmosphere. The welcome was extremely warm when I eventually made it back to Bolands, the food was delicious and I was excited for the race but as I looked around I started to feel slightly out of place, they all looked like proper athletes and I had a secret little panic that I was out of my depth.

I was meeting a buddy of mine there and we headed on to Dunmore East after registration. Originally there was meant to be 5 of us childhood friends competing but for the usual life reasons only 2 of us remained standing and down for racing.

We arrived down to the Strand Hotel in Dunmore East to check into our glamping pod only to get told it wasn’t confirmed by the hotel so looked like a mini stand off was about to happen.  It was 9:30pm and we were unsure of next steps. Thankfully the lovely lady on reception decided it was best to give us a room in the hotel for 2 nights so we happily agreed that this was also the best option. Was no breakfast included but we were happy and this felt like it had worked out better for us pair of misfits.

Being the ex-session monsters, or mainly the freedom of being kid free and away we decided to hit the local pub for a couple of pints of Guinness. Surely the extra Iron consumption was a good thing…….right!!?  We grabbed a bit of food in the Spinaker bar and somehow kept it to the 2 pints and went back to the hotel for a good night’s sleep.

Race day upon us and I woke up feeling fresh around 7am.  We had our brekkie we brought for our glamping pod and took a walk down through Dunmore East to stretch the legs. Everything was feeling good and was very much looking forward to the race. It was like night and day the weather on race day.  When we arrived in the sunny south east the previous day there was torrential rain and assumed the rain was down for the weekend. Thankfully was no sign of rain Saturday morning and with the sun out, it looked like it was going to be a nice and warm day.

We took a walk up to transition area to set up, I thought since we were in the hotel I would go back after race briefing and throw on my tri suit and wetsuit as hotel was at the starting point. This was my biggest mistake and put me under so much pressure to make starting line in time. First trip to transition I forgot my bike computer which I had left charging beside my bed the night before, so back down the hill to pick this up then up to transition area again. It didn’t enter my mind but should have that this would have been a good opportunity to put on my wetsuit but no decided I still had loads of time to go back down and get ready after the race briefing.

We had found a good spot for transition which was marked by a campervan. I met Graham at transition and he set up beside us. I got that feeling again of feeling like a triathlon fraudster surrounded by all these athletes but Graham was full of encouragement so relaxed and waited for the race briefing to start.

The race was due to start at 11am and briefing pushed from 10:30am to 10:40am, S#%t I hadn’t planned this properly at all. I stayed for the briefing and then scarpered back to the hotel to try get ready before the swim, we were on the top floor of the hotel so up more flights of stairs to get ready and now I was starting to panic. I realised I hadn’t brought my wetsuit in from the car so had to run downstairs to my car, as I was coming back out athletes were going to the beach and acclimatising in the water, I still hadn’t changed so ran up to the car and back up to the room to get changed and hopefully back out in time for the start.

I was now starting to sweat and struggling to get my wetsuit on, eventually I got wetsuit on and grabbed my goggles and legged it down to start line. Is photographic evidence of me just making it in time for the swim start. The race was just off and I started to move into the pack to see where I would position myself time wise for the 750m sea swim. I asked a guy in the middle of the pack what his last swim time was and he said 10 minutes……So I moved further back as was hoping to be under 15 minutes.

Nuala spotted me in pack and came over and we managed to have a quick chat. We moved up to the starting line together, I felt like a stuttering mess, I couldn’t get over the panic from my morning escapades but we managed a best of luck fist bump and then 4,3,2,1 – GO!

I waddled out to the water and walked in, the water was cold and cooled me down as was sweating buckets in the heat and my earlier flapping about. I settled into my stroke quickly and got to the first buoy in good time. I turned left for the 2nd Buoy and navigated my way around it easily.  There was a guy outside me closer to the cliff so I stopped sighting forward and just looked at him. This was a mistake as think he was doing the same with me. We swam way too close to the cliff and ended up having a rescue canoer come over and point out we were going nowhere near the 3rd buoy.  I still couldn’t see the buoy that we were meant to be going around so I just swam towards the splash of other swimmers who were more on course. Eventually I could see the last buoy and made the hard turn right and started swimming to the beach to face the gauntlet that was the ridiculous hill to transition area.

I got out of the water and looked at my watch, just over 18 minutes and 970 meters covered. I was so annoyed with going wrong but no time to think about that, let’s get up this hill and get out on the bike and can make up any lost time. Still had the goal of going sub 1:30 so was all still extremely doable.

I arrived back to transition and my bike was knocked onto the ground, I was like why are the triathlon gods out to get me today with this clear sabotage, but then realised there probably is no such thing as triathlon gods and must have been the other athlete who nestled in between Graham and myself just before the start. Anyway, nothing I could do so just picked up my bike and got out of transition and was looking forward to making up time on the bike course.

I started into the bike route and navigated up the first hill with ease. I was picking up speed and feeling strong for first 2km. Then gradually I started losing energy, felt flat and sore. My leg muscles felt extremely tired, this was not good. I tried to chase some people down but didn’t have anything in the tank. I turned at the half way point feeling low and unmotivated for the 2nd part of the bike leg, my competitive head was gone and was now I could just think about surviving and getting to the end. This was a sprint triathlon, I had great notions when starting the N2T programme in January about half Ironmans and Ironmans but I was struggling to get through this sprint triathlon.

I eventually got to transition area and racked the bike and really did feel like pulling out but decided to plough on and see if could get these little tree trunks of legs to put one in front of the other. I started the run out of transition and turned to go up a hill that felt as big as Everest. Excuse the dramatics but it felt needlessly steep.

I was now ready to pack it all in, why on earth am I doing this when I don’t feel 100%, the race from the start to this point has felt like a disaster. Thankfully I see a friendly face in Julie Goggins who gave me some words of encouragement and walked with me the whole way up to the top of the hill. She said she would meet me at the finish line so that’s it I had to finish, was no pulling out now. Was extremely thankful for that walk and encouragement. It’s the little things people do that make the difference when you are battling the mental side of triathlons it seems.

I entered the golf course and I had 2 laps to complete before I would end this nightmare but determined now to finish I walked and ran as my legs allowed me. I walked every incline and jogged in between. The run course was nicely laid out through the fairways of Dunmore East Golf club, if I had the energy I think I would have enjoyed it as runs go but this wasn’t going to be the day that I enjoyed running.

Thankfully I turned for the finish line after 33 minutes and I was met by a nice tunnel of local supporters cheering everyone on. I high fived all the kids that held their hands out which made me smile for the first time that day as I crossed the finish line in 1hr 42 minutes. I was disappointed but was so happy to be finished, it’s not that I had forgotten how challenging the course was and how it ate me up and spat me back out, the negative energy I had accumulated over the time out on the course was replaced with positive emotions from all the support I received and the accomplishment of just finishing.

The BMW By Hook or by Crook triathlon is a brilliant event and extremely well ran, the setting is incredible and the locals really support all the participants as they embark on this tough course. I learned a lot about myself for only my 3rd triathlon and looking forward to returning in 2020 and conquering the demons this course inflicted on me.