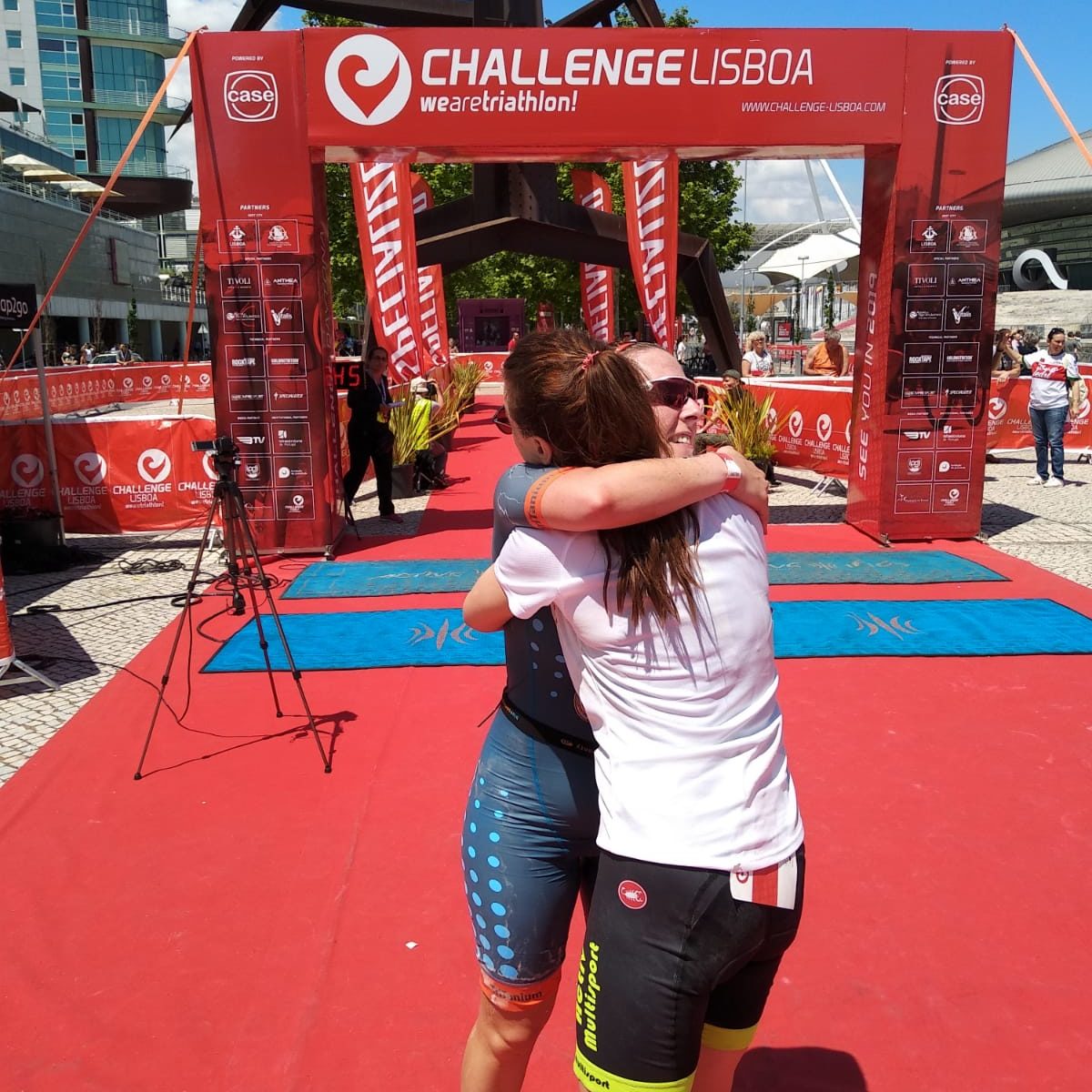 We’re always grateful to receive race reports from our members. They’re real stories of real people doing triathlon. Here we have a story of blood, sweat and tears (or should that be blood, sweat and tyres?). A story of overcoming the odds, of bravery in the face adversary…  Rachael’s race report!

I began writing this race report with “I’ve always wanted to do a 70.3” and deleted it because that’s a lie. I didn’t even know what a Triathlon was until 2 years ago. But I’m very easily influenced and thanks to Ivan Casey I’m here horizontal, stiff as a board in Lisbon.

Before long, here we are in May 18. I arrived at Dublin Airport with a dismantled bike and just enough training done.

There was no ‘Check-in’ on Facebook with a picture of my passport sat beside a pint. I don’t know how many people would be interested in seeing my bottle of water so I saved myself the bother. We watched as they loaded the bikes on to the plane. This is something you shouldn’t do, there were one or two gasps when we saw a bike (not ours) roll straight back down the belt but saved just.in.time before it hit the ground. Travelling is stressful enough without watching these types of things.

I travelled with my training buddy, Ger and her training bud/coach/pain in the ass, James and together we called ourselves Activ TriTanium! I genuinely don’t know how James Coyle would have got through that weekend without us 😉 In other words, we had a great time.

When we arrived at Lisbon Airport late that night, and after what felt like a very long time, the bikes rolled out. There was more than the ‘6 bikes maximum’ as suggested by Aer Lingus when we booked. We were in good company though with other Tri-athletes from Activ Multisport, Piranha and Pulse Triathlon clubs also collecting their bikes.

Dragging bikes and cases through Lisbon Airport should not be underestimated. Consideration should also be given to the space they take up in a taxi. James Coyle, King of the Tetris! 🏆 This taxi driver saw us coming a long way off and he made his money out of us. We knew, we cared, but we were tired. We were only 15 mins away from our accommodation and on arrival, we were pleasantly surprised with the apartment. Huge ground floor apartment 3 bedrooms, 3 bathrooms and a couch big enough to sleep on. If you were that way inclined 😉 We immediately built the bikes. It took some time, some episodes on YouTube but we got there. Straight to bed. Slept like a baby, which is rare for me.

Friday was all about registering, testing the swim, and racking the bike. Smooth registration, it was a matter of calling out your race number and after a quick autograph, you were out of there. We noticed a mechanic set up close by who for a small fee would ‘bike check’. Unfortunately for us, it was the same price to have them build your bike. ‘Why didn’t we do this’ was a common theme. I decided, as I’ve never built a bike before and clearly couldn’t set handlebars straight that I’d have them check it for me. The bike felt brand new, money spent well. We were allowed entry to the swim section to get a feel for the water and as I stood there looking out at the buoys I felt very overwhelmed. We all swam to the first buoy and back. Approximately 600m, only. It looked much further. Serious reality check. But, the water was A LOT warmer than my quick dip in Lough Lene last week. ❄ I knew I’d get through it, slowly, but always happy to get out of the water.

Racking the bike later that evening was where I had another reality check. I reckon I counted 20 road bikes. There were Tri Bikes there worth more than my car ffs 😂

The morning of the race itself was brilliant. No real nerves until I stood next to the water. But as soon as they started they were gone because for the first time ever the Portuguese were on time. Gun off, Rachael gone like the clappers. Not. I left everyone go, like I always do. And just took off at my own pace. This went really well until the turn at the first buoy and I was surrounded by ‘the red hats’. I’m not pointing any fingers Gareth but I got one or two digs that left me swallowing lots of water. Very happy with my 49min swim. I’ve read race reports of people being unhappy with 29min swims. Who are these people 😂 no mad panic in transition, just me and a few stragglers trying to squeeze wetsuits into sandwich bags.

Out on the bike, slowly getting warmer. I found the first lap of the bike great, loads of super bikers to watch absolutely booting it on the other side of the motorway. Second lap fine too. I am one of these people who talk to themselves saying ‘ok you just have to get back here 3 more times’ then ‘ok your halfway now’.

So when I set out on lap 3 I was happy thinking ok, just the same again. Felt fine. Just as I approached the hill before the turn back I felt like I was struggling a lot sooner than before and I looked down to see I had a puncture. I couldn’t tell you how long I had it, because other than a few bumps and holes in the road, I still don’t know what I hit. I remember saying ‘you are kidding me’. I pulled in. Devastated. I’ve never changed a tube. But I had all the tools. So I got my little levers out and said I’d give it a go at least. I watched Rich change a puncture for me once before so I knew what to do, I’d just never done it before.

Long story short, I got the tube changed handy enough. What didn’t cooperate was the air canister I had with me to pump the tube. Cue tears. Watch stopped and saved. I started walking with the bike. I had seen loads of fallen puncture prepare kits earlier up the road so I was thinking if I just came across one of them I’d be fine. Not one. I walked with my bike for 15 mins, with everyone passing me, some on their last lap, crying. I had come to Portugal and still wouldn’t have completed a 70.3. I wouldn’t have been able to celebrate with the lads that evening and I wasn’t going to get a medal to bring home. It was all about the pints and bling. I got to the turn back point and the spectators that had been there on the other 2 laps had moved on. It was just me and the cops. And I don’t like cops.

I stood for about 5 minutes wondering how the hell I was gonna get back when two competitors came up the hill. They both stopped to take a break. One was guiding the other and I noticed they had a pump. 1087 is my hero. He pumped my wheel for me. I knew, but I didn’t care, that I’d probably be last, so I just ploughed on. The return of each lap is very fast, so I flew back. I remembered there was a wheel station back at transition. Contrary to popular belief the wheel station does not have a pump. I still had one lap to go but figured I could at least try the last lap. I grabbed my last bottle of water and off I went. Imagine cycling on the m50 for 20km with no one around. Just me and the tumbleweed. You can imagine the chats I was having with myself here.

I struggled to eat with the heat and drank all my water but I could see light at the end of the tunnel. I’ve never wanted to run a half marathon so much in my life. I’m laughing here even thinking about it. I was almost home, maybe 500m when, due to, I don’t know what, maybe changing the gears too quick? The chain came off. I had no more tears left so I just got off, got it back on. Jumped back up, ready to rock, 3 seconds later, fell off again. It was at this point that I imagined throwing my bike across 2 lanes of traffic into the sea. Oil all over my hands and probably my face I arrived back to transition. I racked the bike and gave it the fingers. Runners quickly on and I set off on the run. Run is a stretch, the heat was a killer. I ran some, walked some. It was genuinely the hardest run I’ve ever done. All of a sudden the swim felt like it was last year. I passed my friends multiple times always wondering how far behind I was. As it turned out, they all had 2 laps on me, but that was to be expected. I eventually finished with a time of 6.59, sub 7 hours 😂 yayyyyyy 😂 it was the hardest thing I’ve ever put myself through, mentally more so than physically.

Before they even placed the medal around my neck the words ‘never again’ were coming out of my mouth.