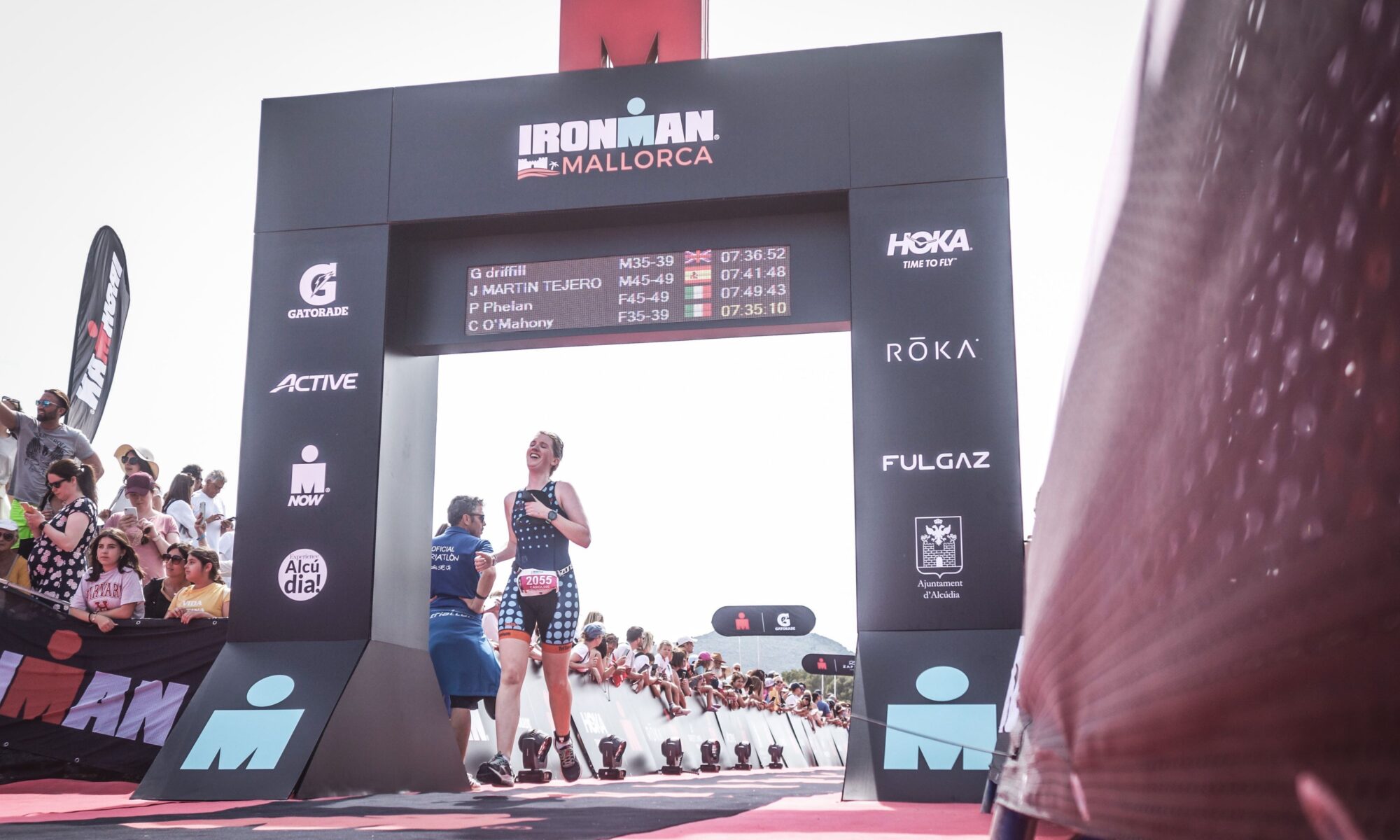 In May 2019 I stood in the water in Alcudia cheering on the TTC crew and decided that I’d be back next year to race it for myself. Little did I know it would be a three year build up to my first 70.3 and boy did I let it build up in my head.

I moved home to Cork for lockdown and tried to keep up the training but really struggled on my own. Eventually I bit the bullet and joined the mountain goats and winter sea swimmers in Crosshaven Tri Club. Best decision I made, it got my looking forward to training again and enjoying triathlon, something I hadn’t been doing when it was just me pottering around on my own.

I got a bit of routine and focus going again and as it became more likely that Mallorca would be going ahead, I realised I needed help, enter Joe! We had a great chat, set realistic expectations and for the next few months I just followed the plan. Trust in the process and do what I was told to do. Come February 2022 I moved back to Dublin and really focused on training. At the same time, my brain kicked into overdrive and the nerves and worry ramped up accordingly!

I’ve always been a doubter and never really had faith in myself, but I knew it was achievable. I have seen so many people complete it, people just like me. If I kept training, there was no reason I wouldn’t complete it.

I seem to have completely forgotten that fact in the weeks before the race and struggled big time.

Standing on the beach in Mallorca, listening to the music and looking around at some serious looking athletes look anxious had a calming effect on me and despite the feeling of thinking I was going to get sick with nerves I realised I felt a bit of excitement as well. About bloody time!!

The swim went very smoothly. I planned to keep out left a little to avoid the melee but I’m like a moth to a flame and headed straight for the yellow buoys on the right. I tried to get on someone’s feet and get a tow, but it never quite worked. The night before I asked Joe what time I should aim for and then laughed when he said 35 minutes! So, we compromised on 37.5. On the day though they had 35 or 40 and I freaked out and played it safe. Quickly realised I should have listened to Joe one more time. Why did I choose now to not listen to him!

I didn’t get too badly battered in the swim and the turning buoy finally appeared. I had a few moments of “oh Christ, I’m doing it” throughout the race and this was one. I came out of the water just beside Emma, quite reassuring to see the dots and to hear Ana cheering us on. Eoin quickly popped up beside us as well, sure it was just like the NAC on a Tuesday night.

Transition was very smooth. “Take your time in transition” was Graham’s advice. Advice I doubt he follows himself, but it worked well for me and before I knew it, I was rolling out towards Pollenca.  Luckily Eoin and I had done these few kms the day before, so I didn’t go wrong at one of the early roundabouts despite the guy in front of me heading off down a side road and some other tosser roaring abuse at marshals for not putting up signage. I took a little bit of pleasure from passing him later on up the hills!

Not sure what to say about the cycle. I loved it! Maybe not the reaction many have, and it does make me wonder did I go easy on myself but the roads, the sunshine, the fancy bike. It was all fantastic! Again, the bike plan was to take it steady on the hill and it worked perfectly. I’ve felt worse trying to hang on to the Saturday group up Summerhill. Getting dropped by the Saturday group the last few weeks and finishing the long spins on my own definitely stood to me. I had no bother being out on my own, was happy out to keep munching away and knew I could do the distance solo without stopping.

At the business end of the climb, I seem to have forgotten how to ride a bike and dropped my chin twice. Luckily it was a very slow pace and I had plenty of time to unclip and pull in. It was properly jammed though, and it felt like an age before I got it fixed. I wasn’t back in the saddle long before I managed to do it again. FFS. this time someone on the same rented bike shouted, “dodgy bike?” to which I replied “dodgy rider” and tried to smile my way through being passed by all the people I had passed earlier. I was back on the road in no time, albeit terrified of changing gear for a while. I powered on in whatever gear I was in and wasted a lovely sweeping little downhill by staying in the small ring. I was not budging gears for a while!

The switchbacks were fun! After riding a bike with disc brakes for the past 3 years and never really feeling a difference I finally realised why disc brakes are so popular. Made a mental note to get my own bike serviced!

I hadn’t really looked at the course beyond “the climb” so hadn’t a clue where I was or what was ahead. Probably for the best. A tough out and back along the main road was tiring, felt like a headwind both directions and I really struggled to hold on to the person in front. Thanks to the overly dramatic marshal at around 60km who made a big deal of pointing up to the sky at a left turn I manged to get myself in the right gear and got a mighty cheer/laugh  from the few locals on the corner. I think they saw my face looking up the hill. Short and sharp. I vaguely remember people telling me about this one. Short stood out in my mind, so head down and power on.

At one stage I realised if I pushed on I could finish under 4 hours (I hadn’t set proper target times, can’t miss them if you didn’t set them!) but 4 hours was at the back of my mind. I think I would have made it as well if they didn’t add on a completely unnecessary 3km out and back at 90km. It was carnage, cones everywhere, marshals telling us to keep to different sides, not really knowing where to put myself so I wasn’t blocking the full distance riders who were powering through but not get stuck behind anyone either. Eventually we turned on to the long home straight. I though transition would never appear but that could also have been dread at the segment to come. The run. My least favourite discipline.

Thank God for spectators is all I can say. Great crowds coming out of T2 had me smiling and moving, a quick mental check to slow down a little and get the heart rate under control. The plan for this bit was to jog steady as much as possible, walk the aid stations and try to keep coo, a.k.a survive.

Lap one went surprisingly well and looking at Strava I think I manged to jog most of it. The out and back along the main road was bleak and a struggle on every lap despite the small chats with my new course friends from Setanta. Keeping an eye out for the dots, our supporter Ana, and Graham who was long finished by the time I got running helped to distract me a little bit and lovely to see the Crosser colours up ahead at one point.

I seem to have blocked a lot of the run from my memory. Probably for the best, no-one needs to hear the self-talk and swearing that went on in my head!

I met a lovely lady on the wooden bridge on my last lap. A veteran 70.3er she told me to get ready for the finish, to take off the visor and glasses and soak it up, you never get to do your first red carpet again. Solid advice wooden bridge friend!

The last few hundred metres were epic, and boy did I soak it up. I knew I was OK for time bit hadn’t looked at the watch so I it was great to see 7.35.10. Think that’s when it all caught up on me. I had done it, set myself a goal, worked toward it and now I had the medal🥇

A few days enjoying the sun and I am rearing to go again for Cork in August. For anyone thinking of a 70.3 …do it. Get in the routine of doing the club sessions Rich has put so much time in to developing and structuring, get extra help of you need it, stick to a few core people you can rely on for solid advice and go for it. You won’t regret it and sure you get a few shiny new t-shirts and bling!