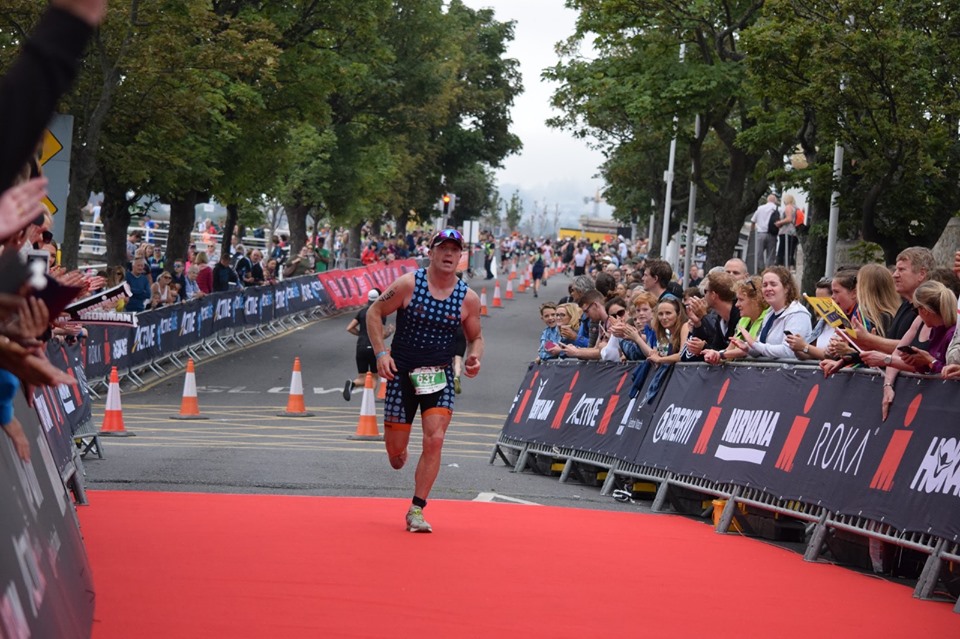 Firstly, Why enter Dun Laoighaire?? I had no plans to race here this year. Plan was Mallorca 70.3, 4x national series races (Hook or by Crook, Harbourman, Tyrone 70.3 and Pulse port Beach) and my A race Barcelona Full IM. Having returned from Mallorca slightly disappointed with how I ran off a tough bike in the heat I questioned whether the issue was the heat or the hard bike? I was unhappy with my placing and knew I am capable of better. As a reaction to this I booked IM DL. I then told my coach as it was obviously not in the plan and he, and others whom I trust, agreed this was a really stupid idea but not my first or last!

About 6 weeks out from the race myself Ivan, Grainne and Ciara met in Dun Laoighaire as I’d convinced these to come along with me on a recce. The course was gruelling, hilly, terrible road surface and we survived it is about the best thing I could say about that morning other than me and Ivan went for a nice run after. I knew I was going to be under pressure for the race on this bike course. My training schedule (still focussed on Barca) was not going to allow me practise this course over and over until my legs and mind could handle it.

In the mean time I met a friend who told me he was heading to Nice in September to compete in the IM World Championships in a spot he had got from DL in 2018. He is a good triathlete and in an older AG but this was enough to start my obsession with the numbers. Having done the maths I worked out that 5 hours 15 mins last year would qualify me for a WC Slot in NZ in 2020!!! I was off the back of a 4:31 in Tyrone and although the course in DL was a different animal I let it creep in that this was possible. I then made the further mistake of telling people about it… now it became a goal to qualify for NZ.. Anything less was a failure. I set myself up for a hard fall.

The lead up to the race for me was fine. It was a welcome distraction having Nuala and Chris competing in their first IM competition which lead to a lot of talk and a lot of questions to which I had most of the answers. Where the lead up to the race did not go well was my preparation for that bike course. I managed to go around it once more 10 days out from the race with the wrong gearing set up on the bike and it took me over 3hours 20min. While a respectable time for a recce of this course I didn’t feel I could run off this effort and hated every minute of it.

Having registered Friday and racked and practise swim Saturday I was quite relaxed heading over Sunday morning. However in the forefront of my mind was the numbers…swim 35/36, bike 3 hours, run 1.30… this is the sweet spot for NZ slot.. I had looked up all other competitors I could in my AG… I had compared names to those I raced in Tyrone and those that raced National champs in Sheephaven… looking at people going around… Wondering whether they 30-34… This battle had been going on in my head for a couple of weeks.

Met Nuala in transition and headed down to swim start. Relaxed and focused on the job in hand. Thunderstruck begins… goggles on and its game time.. I watch Brownlee and Mintern and McCrystal take off like speedboats and the AG’s get moving and I’m ready for the off.. Slowly shuffling towards the start and then we stop. A sea mist has come in and you cannot see the first buoy.  180 AGs have already taken off and they cannot even be seen anymore. Joanne Murphy announces for safety the start for everyone else has been stopped/delayed. For the first 30mins there is no improvement. The prospect of a bike run comes into my head and I’m happy with that thought but still the questions in my head, What would I need to Bike/Run for a NZ spot? How about the lads that are gone off already?  How will they allocate the slots?? After 45 mins the mist lifts slightly and Joanne announces that we will be having a race with a shortened swim, about 8 mins later and I’m in the Irish sea and going for it hard knowing it was a shortened swim and about 1000m. I’m out in a time of 16.45 which is a 1:46 avg pace which for me is very quick. HR is high as I sprint into the transition tent. I get my wetsuit off and grab my bag. I know I am panicking so I tell myself to calm down. I take a breath and get my gear on. My helmet is not on right but time was of the essence so I sprint out to my bike, grab it and head for the mount line. I see 2 guys fall and thank the Lord that I did my falling in my garden during the week and decided against a flying mount and wore my bike shoes running. Up on the bike and start that clock.

After about 100m I lose my aero bottle which contained my concentrated CD (Cyclic Dextrin) which is my fuel preferred at the moment to tailwind or gels. I decide time is more important and plough on. I’m losing time messing with my twisted helmet strap which I should have fixed in transition and know I won’t get it right without taking it of so decide to keep going as is. My HR is stuck at 168 and I’m trying to regulate my breathing and effort to get it down but was climbing out of DL and wouldn’t let the pace drop. By the time I got to the base of the first major climb I was spent! I dug in and tried to just spin the legs. Then disaster, I knew I’d only 1mm clearance between rear derailer and my disc wheel,  I took the risk to go with it but on the first climb its rubbing.  At the top of the climb I dismount and release the back brake and move the wheel, by the next climb it was back rubbing again just in that easiest gear I knew that I just had to get on with it. Between climbs I pushed hard and was traveling well on the downhill’s and flats. Climbing was killing me though. When we got to the Sally gap I was delighted that most of the climbing was done. There was a freezing mist there and visibility was very poor. For the first time I notice a strong crosswind. It was playing havoc with my 808 and disc wheel. I felt very uncomfortable. When we got onto the technical descents I had no bottle. I squeezed my brakes and was worried as the wind blew the bike around. By the bottom my wrists were sore from clutching the bars so tightly. Then the final 20km into DL. Down from the mountains and onto the flats,  time to be made up and I put the watts down and flew back into DL. My Flying dismount went well despite still having one shoe on…haha! At this point I was really disheartened with what I thought was a disastrous bike. I noticed that despite losing a bottle there was one still half full on the bike. I knew the fuelling was poor. I left all this behind leaving transition. I’m happy that I could mentally park it and begin chasing down the run.

I flew out of the traps and tapped a 3.51 first km. Whoa says Danny. I knew this wasn’t sustainable so tried to drop it back into a comfortable pace… for the first 7 km I was running around 4.10/km which I knew was too quick but I felt good. I took water on at every water station and had great support at different parts of the run from all the TTC Crew and Danny! I am very grateful to you all! Second 7km dropped the pace to around the target 4.18/4.20 pace. This felt ok at first but I could feel what was coming and nothing I could do now was going to prevent it… It came at 14Km. I had spent all my matches and had nothing. I had no fuel to burn, it was time for pain… I had run myself to this point and it was a case of getting to that line by any means possible. It was mentally very hard but I got up that IM carpet and fell across the line in 4 hours 58 mins and 43 seconds. I was done. I had given all I had on the day and I can’t ask for anymore of myself in those 5 hours.

Now comes the lesson learning’s and the reason I bothered with this is to try help someone to not do what I did. For the next 5 hours I talked about nothing but result times and IM WC slots. I attended the IM presentations in hope of closure and due to the strange nature of the start they awarded prizes for 2 separate races. I was 4th in my AG in the short swim and instead of being delighted I just wanted to know did I get a WC slot. It turns out that I left 7 hours after I finished the race with no better knowledge and on standby to find out by email. I spent until the following Tuesday week refreshing and checking my emails and finally 9 days later the bad news arrived. I hadn’t been allocated a slot. We have no idea how they calculated it and I know people complained and that I may have been unlucky but I was just so glad it was over. It is what it is and my time wasn’t sufficient to qualify me for a slot.

IM 70.3 or Full ore not things to be decided on a whim. I didn’t give this race enough respect which was why I struggled. If this was my A race and I really wanted that WC slot I’d have known that bike course like the back of my hand and been up it 10+ times.  I took a risk with a dodgy derailleur position I wasn’t happy with, I didn’t stop and pick up my vital fuel bottle, I didn’t put my helmet on right, I ran out too hard. I made all these mistakes in pursuit of a goal that I hadn’t prepared myself properly to achieve… And worst of all was this attitude because……

These despite not giving it the attention it deserved. It’s done and dusted now, lessons to be learned… will I see IM DL 70.3 again? I don’t know. Barca up next, lets be having ya!!!